I WROTE A BOOK

On April 10, 2018, the Personal Development/Self Improvement book club met to discuss our second pick – The Subtle Art of Not Giving a F*ck - A Counterintuitive Approach to Living a Good Life by Mark Manson. I did have some reservations about the title, knowing that the women (so far, only women) were going to have to say the F-word repeatedly… it turned out to be just fine. During my local advertising of the meeting, there was more “buzz” in our neighborhood social media. People would chime in that they felt they needed this idea in their lives, and others who had read the book were enthusiastic about the choice. In my role of facilitator, I would read the book in advance before I proposed it to the group, and I was surprised about this one. We (or I, I should say) originally thought we would talk about Braving the Wilderness exclusively, but after two meetings, we got bored. We were hungrier than that, apparently. Mark Manson was a blogger, freelancer, “influencer” if you will, online. He spent a lot of time in his youth traveling, womanizing, and appearing to do very little, if you ask me. Yet by the end of his adventures, he was able to tie in all of his experiences into a simple philosophy of not letting everything drive you insane with worry (The “Feedback Loop from Hell.” Sounds about right). People use the expression “I have no more f*cks to give,” ad nauseum, but do they understand what it is to truly let go of all of the petty worries that come our way? We want to worry about important things, that we have some control over, that have meaning. It’s not a book that tells us to freeload and do nothing all day, as some might imagine from the title. It’s deeper than that. For one thing, it helped me not judge a title quite so quickly. We all have great lessons from our growing up, and adult experiences. He was a kid who seemed to be on the road to self-destruction at one point. It’s easy to write off someone young who looks like they don’t care, yet most of the kids we think of – and we all know someone – are struggling, and haven’t had the support they needed, and are responding to stress. What was nice, is that after reading Braving, then this book, there were some parallels to take note of, such as needing connection in difficult times, and we were also able to talk about ways we used some of the new ideas and skills in our lives. The women began to share more personal information, and were given and able to give support. We could point out the ways in which we were letting petty worries get in our way, and cheer the times we were not. Also similar to Braving, is the idea of standing out – and being who you are, not the way society, peers or family want you to be. We have to make  choices about what is important to us that align with our personal value system. These days are tough and stressful, and if we all expend our energy on things that aren’t important while ignoring things we can do something about, we’ll all just implode. And if you don’t have control or the ability to save the world, find the thing you can do about it – even something that seems very small. We can pare down the BS and building up the value, instead. Rating given by Book Club - A
Read more
A Year of Self Help Reading – Braving the Wilderness
Arts and Insights2
No comments 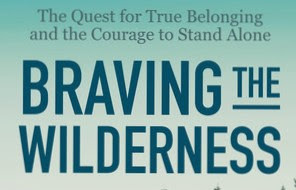 2016 to present Therapist in Private Practice